The three deepest lakes in Europe are found in Norway.  All are formed as a result of the last Ice Age. About 10,000 years ago, during the last Ice Age, Norway was covered by a 4km thick layer of ice. When that ice retreated (or melted) its movement across the land formed innumerable lakes and streams. It also etched out deep valleys that then filled with sea water forming Norway’s fjords.

Hornindalsvatnet is Norway’s and Europe’s deepest lake, officially measured to a depth of 514 meters. Its surface is 53 meters above sea level, which means that its bottom is 461 meters below sea level.

Salsvatnet with its deepest depth of 464 meters is Norway’s and Europe’s second deepest lake. This lake is different. As a result of the isostatic uplifting of the earth’s crust after the last glaciation period many basins in Norway which was flooded by the sea became fresh water lakes. Although the surfaces are well above sea level, some of these lakes contain salt water. In Salsvatnet salt water remains in the deepest 50 meters of the lake. Since the salt water is permanently stratified, without oxygen in the lower depths, Salsvatnet is meromictic. During our dives this was confirmed as the meromictic layer is clearly visible with the ROV cameras, and was easily confirmed using a CTD mounted on the ROV.

Lake Tinn is the third largest lake in Norway with its deepest point at 460 meters. The wreck of the ferry “Hydro” is situated close to the deepest point of the lake.

In 2006-2009 the Promare team dived to the bottom of all three lakes. This was the first dives to Europe’s deepest points.

The main discovery was a small white fish which was discovered on the bottom of Lake Hornindalsvatnet and Lake Tinn. No life could be identified in the meromictic zone in Salsvatnet. The lake bottom is typically covered with a loose mud, and the fish were discovered on the bottom, halfway mired in mud. When they were disturbed by the ROV, the fish swam a short distance (1-5 m) along the mud surface, leaving a track before they rested partly submerged. The fish were white, and the size was found to be between 5 and 15 cm Fish head was large, broad, and blunt with well-defined eyes. The body was small and dilute with two large pectoral fins and smaller pelvic fins. The tail fin, with clear soft rays had “salmon” form.

The team managed to recover several examples of the fish from the bottom of each lake using a specially developed sampling tool.

The fish have now been analyzed by the Norwegian Institute for Nature Research. Genetic studies show that it is some kind of Arctic charr (Salvelinus alpinus). Preliminary analysis suggests genetic similarities to other types in Norway, and that it probably developed post-glacially.

The preliminary conclusion is that this is a separate variety of Arctic charr which have developed from eggs that have fallen into the deep and inaccessible parts of the lakes and there developed into a separate community. It is likely that this process takes place in many deep lakes in Norway. 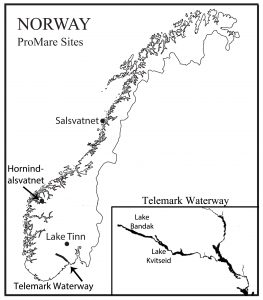